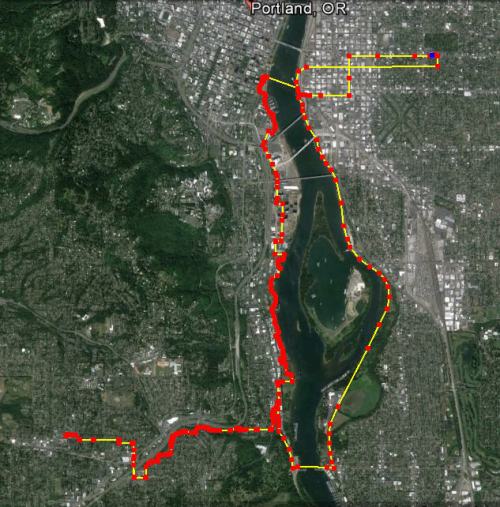 Today we took a bike ride down the East Esplanade to the Springwater Trail, over the Sellwood Bridge and up to the Oregon Public Broadcasting building on SW Macadam Avenue. After parking the bikes we headed uphill, hiking a portion of the “SW Trails 4” leg of the SW Trails system for the first time. We’d seen signs for the SW Trails on earlier bike rides in the area and wondered what they were and where they went.

We discovered that they are a series of very hilly urban trails (created by SW Trails, a community nonprofit group aimed at encouraging walking/biking in the southwest hills area). This particular trail took us pretty much straight up the hill from Macadam Avenue to Multnomah Village (our turn-around point) via streets, easements, and a few dirt paths. There were LOTS of stairs and some incredible views of the Willamette River and some local buttes.

We stopped briefly to check out a very modest 1942 house that was for sale for a mere $672,000 on SW Custer Street with a “sweeping view of Mt. Hood, Mt. St. Helens, Ross Island and the valley from sunrise to sunset”. That’s gotta be worth the price right there!

Some of this walk parallels I-5, and the noise level is high in places. The trails themselves are well-marked and somewhat cared for, but it was a bit overgrown in places and goes through some odd connectors like the stairs from SW Barbur Blvd down to SW 19th Ave and the connection from SW Canby to the other part of SW Canby through the woods. Because you go under and over bridges, some of the trail feels a bit sketchy, though we saw no illicit activity other than graffiti which had already been cleaned/painted over.

There were some whimsical finds along the trail…toy horses and dinosaurs tethered to the horse rings along Custer and this very well-hidden warthog inside a log somewhere on SW Canby.

And Keith, of course, found yet another feline friend to pet.

If I had a dollar for every time I saw him in this pose in Portland, I’d have a nice savings account going!

We found the Lucky Lab Public House when we got into Multnomah Village and stopped for outrageously huge salads before re-tracing our steps back down the trail, retrieving our bikes and riding north along the river to the Hawthorne Bridge and back home.

This little corner of SW Portland gave us a whole different feel for the city, reminding us that it’s a big place with a lot of personality and community spirit tucked into each neighborhood. 12 miles on the bikes, 5 miles of walking, 600 foot elevation gain – a good day in the city!

There is SO much yet to explore!