Play in the snow & be joyful!

Okay – I got so caught up in the snow yesterday that I forgot to post, so today you get TWO graphics to make up for my tardiness.

Portland experienced a record-setting snowfall yesterday, up to 14 inches in some parts of the city. At my place we got about 8 inches. Schools and businesses were closed and the streets were quiet when we got up. But when I went out for a walk later in the day, the parks and streets were packed with snow revelers. It was too beautiful to NOT be out in it. I wanted to feel it crunch under my feet, pack a snowball in my gloves, and wonder at the shapes and colors the snow had created on the landscape. It is amazing how many shades and shapes snow can make.

In my two walks around the city – one before dawn while the snow was still falling and one after noon when the sky was a bit brighter – I covered about 7 miles. During the second walk, I went to a local park where hundreds of people were sledding, throwing snowballs, building snow people, and letting their dogs run and play. Soon, a sound emerged from the trees. Music. I looked up to see where it was coming from and a man, playing an accordion, was calmly strolling through the park, leaving smiles and dancers in his wake. This simple act of making music in public on this snowy day created an air of joy. 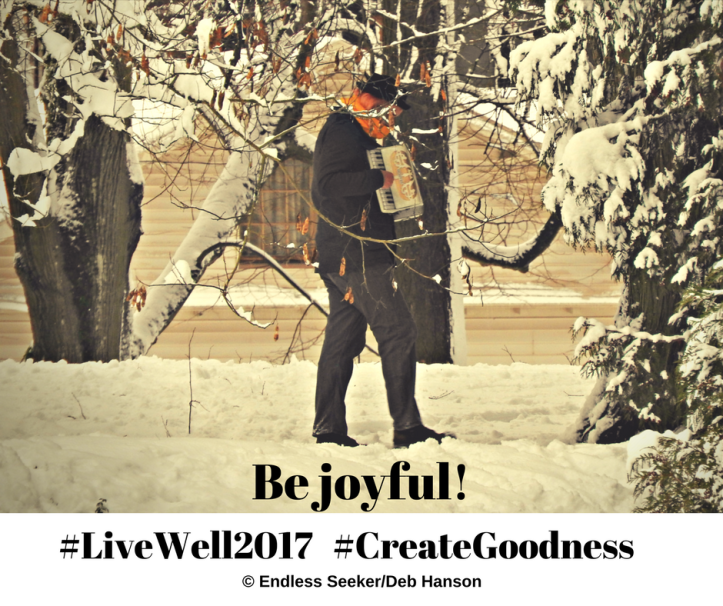 Later, as we stopped to watch some daredevil teenagers sled down a steep hill, a woman came near and said, “Have you noticed how everyone is smiling”? Yes, I replied. There is something about snow in a place that doesn’t get this much of it often that makes people happy.  Squeals and laughter harmonized with the accordion music, and people smiled. A synergy of energy and intent creating goodness.

What made you smile today?