There is only now 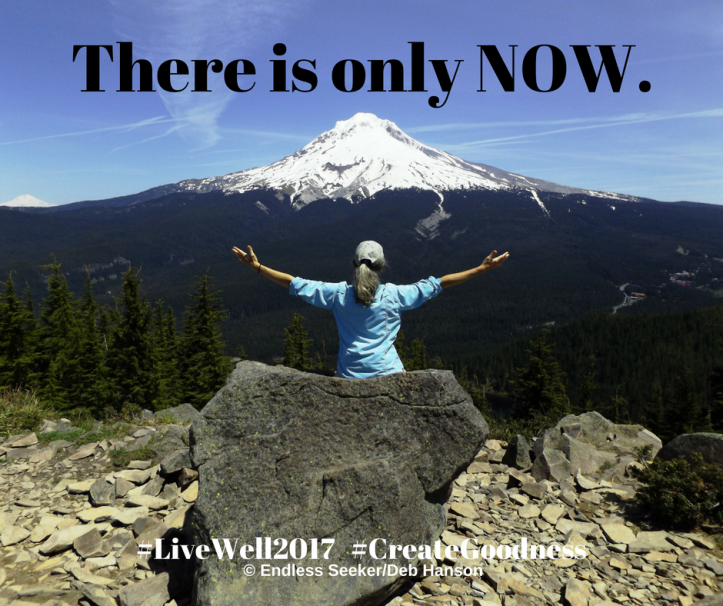 Too often people take this advice to mean they have to be always “on”- always focused on the now, always happy, always perfectly tuned in what is happening around them. I’m not one to look backwards, focused on the past. I don’t worry about things that happened yesterday or wish I could go back to a time in my past. I tend to look forward. In fact, I’m a master at looking forward, dreaming, plotting, planning, worrying. The trouble with looking forward too much is that I miss out on a lot of now. Let me share an example.

We were traveling in Victoria, BC last fall when a major storm system was approaching between home and Victoria. Forecasts called for high winds, rain and flooding, potential landslides, downed trees, and power outages. We were scheduled to take a ferry to the mainland and then spend a night in the Olympic Peninsula where rains were predicted to cause much damage and flooding about the time we were to arrive. I began checking forecasts every five minutes, obsessed with what might happen, constructed elaborate worst-case scenarios in my head, and made my husband anxious.

While it was prudent for us to keep track of the storm and make plans to either stay put or leave early to get ahead of it, it was a waste of precious time for me to spend a whole day and night obsessing over what might happen. I was in a beautiful place, was safe, and had the love of my life by my side. I should have been satisfied with making contingency plans and then relaxing into the moments we had left, enjoying my last night in Victoria. Instead I lost those moments to worry, and worse, caused my husband to lose them, too.

I know that sometimes bad things happen, and the unexpected is to be expected. The key is to deal with things as they happen and move on. In the context of Living Well in 2017, I plan to spend less time worrying about things that might happen and more time simply being in the moment, mindful and active, present and aware in each moment. After all, there really is only now.

What about you? Are you good at being present and living in the now? If not, why not?